Modi Government all set to implement performance based incentives for Govt. Employees

The Department of Personnel and Training (DoPT) is slated to give a detailed presentation on Performance-Related Incentive Scheme (PRIS), which was recommended by Sixth Pay Commission and accepted by the UPA government, to the prime minister soon, officials said. PRIS could not be implemented by the UPA government which had given its “in-principle” approval.

DoPT is likely to outline the salient features of the scheme aimed at improving governance in its presentation to Modi. “The detailed guidelines will be put in place after prime minister gives his go-ahead to it,” a senior DoPT official said.

As per the draft guidelines framed during UPA’s tenure, performance-related incentive will bepayable taking into account the performance of the organisation and employees during the period under consideration. There are about 50 lakh central government employees.

“PRIS may prove to be a big game changer for improving governance and delivering maximum output. The prime minister may incorporate some new features,” the official said.
By IP/ASP Kerala Association - May 31, 2014 No comments:

Smt. Shanthi.S.Nair, Chief PMG Kerala retired on superannuation today after a short stint as Chief PMG Kerala. Association wishes Madam a very happy and healthy retired life. The office bearers of the Association  under the leadership of our President Sri. R.Venunathan Pillai and CS Sri. Nandakumar visited Mam in her chamber today morning and extended a formal farewell. A memento was also presented to Madam as a token of our love and affection. 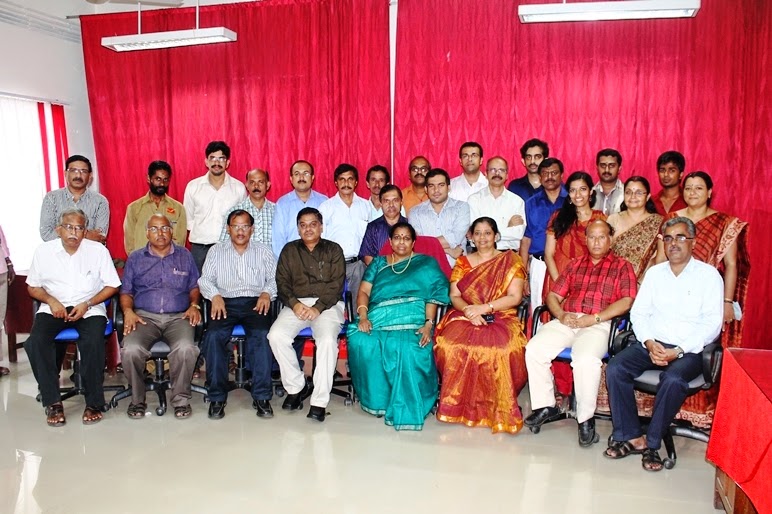 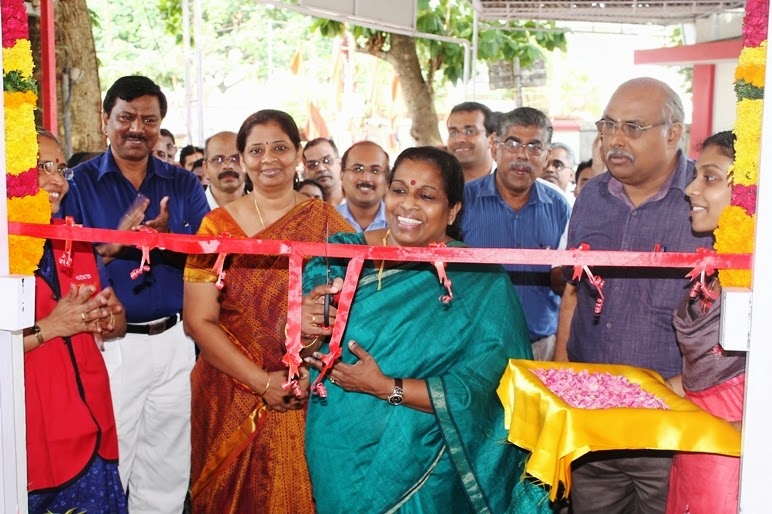 While making the enquiry of this case at Directorate for non filling reply to OA, it is learnt that the matter have already been referred to MOF on 7/5/2014 and their say is awaited.

The sheer pace of the 7th CPC has impressed the central Government employees so much that their expectations have started to grow.

It has come to our knowledge that a number of unions and associations are seriously involved in filling up the questionnaires prepared and sent by the 7th CPC. It is also well known that on behalf of the National Council JCM Staff Side, the questionnaire had already been filled with the approval of all members and has been sent. (Click here to view the reply)
There is no uniform pay scale or promotion hierarchy for the Central Government employees. The departments functioning under each Ministry are evaluated separately. Promotions and pay scales are decided based on the post/category of the employees in each of those departments. Based on these segregations, the employee unions/associations of each department are preparing their Memorandums containing their demands and issues.

Various unions and associations of each of these departments are currently preparing their own memorandums to send to the 7th CPC. These memorandums also contain their long-standing demands and expectations.

It can be inferred that these memorandums, prepared by various associations of employees starting with Group ‘C’, right up to the Gazetted Officers Association, reflect their thoughts and demands.

Pensioners Associations are also participating in this in large numbers. It shows the fact that they believe that their requirements will be fulfilled by this Pay Commission.
The 7th Pay Commission is offering this rare opportunitythat was not given in the previous Pay Commissions. Each issue has a number of different perspectives. This could lead to a consensus-based decision that appeases all. It is a healthy trend to watch so many people vying with each other to present their opinions and suggestions.
There is special curiosity and eagerness to read the Memorandums of some of the important Central Government and railway employee federations.
Given below are the links to some of the most prominent Central Government employee unions and associations:

Directorate seeks clarifications on the merger proposal submitted by the Association

No. 25-35/2011-PE-I
Government of India
Ministry of Communications and IT
Department of Posts
***********
Dak Bhawan, Sansad Marg,
New Delhi 110001
Date : 19th May 2014
To,
The General Secretary,
All India Association of Inspectors and
Assistant Superintendents, Posts,
CHQ Qtr. No. 12, P&T Colony,
Khurshid Square, Civil Lines, Delhi – 110 054.
Subject : Merger of ASP cadre in to PS Gr. B cadre – Proposal regarding.
Sir,
Kindly refer to your letter No. GS/AIAIASP/Merger ASP/2013 dated 20.11.2013 and 21.04.2014 on the subject mentioned above.
2.       In this regard, this is to inform that the proposal submitted by your Association has been examined in detail with the following observations:
(i)          It was intimated in the proposal that there is a matching saving for the proposal as there would be an additional expenditure of Rs. 66,86,100/- per annum against the saving of Rs. 69,25,100/- per annum. This means a net saving of Rs. 2,39,700/- per annum. However, while this may be true in the long run, at present there would be no matching saving, as pay will have to be protected for the 679 ASPs till they get promoted to PS Gr. B Grade, while additional expenditure of Rs. 66,86,100/- would start immediately Savings will start accruing only after the 679 ASPs working on the ASP posts downgraded to IPs get promoted to PS Gr. B Grade which will take a very long time. Thus, it is not correct to say that the case has matching savings.

(ii)         The proposed down gradation of 679 ASPs (Sub Division) to IP (Sub Division) would create technical problems as ASPs cannot be posted on IPs Posts. Otherwise, they would have to be reverted which is not permissible. The proposal, thus, would only be beneficial for the senior 1311 ASPs and at the same time detrimental to the remaining 679 ASPs who may suffer reversion. Further, on upgradation of the ASPs Posts to PS Gr. B there would be two or more Gr. B officers in Gr. B Divisions. Then, there would be a problem / issue of reporting and also that who amongst them would head the Division.  This would ultimately create complicated situation and may not, thus, be administratively viable.
(Note :- the number of ASP Sub Divisions has been ascertained from the Circles and the matching savings have been re-calculated on the basis of information received from the Circles)
3.       Therefore, it is requested to furnish your comments / clarifications on the above mentioned observations for further examination of the proposal at the earliest.
Yours faithfully,
Sd/-
(Tarun Mittal)
Assistant Director General (PE-I)


PS : All Circle Secretaries / CHQ office bearers and members are requested to submit their comments in detailed to GS by email

Our newly elected President Sri. R.Venunathan Pillai has been transferred and posted as SP, PSD Trivandrum with additional charge of SP TVM South Division. He assumed charge yesterday itself. All the very best to our President in his new venture....
By IP/ASP Kerala Association - May 28, 2014 No comments:

Glimpses of the 42nd Biennial Circle Conference held at Kannamali

Yet another historic conference- new office bearers elected at Kannamali

Kochi witnessed yet another mega event in the form of the 42nd Biennial Circle Conference of the Association at the exotic venue-Michaels Land Resort Kannamali, on the 24th & 25th May, 2014. The pre-conference working committee was held on the 24th at 3.00 PM in which about 30 members participated. Accommodation was arranged for all the CWC members in and around the venue.

The CWC was followed by a series of entertainment, games and sports. In the keenly contested football match held at the venue between Central Region and Southern Region, Central Region emerged winners with the scoreline 3-2.  Our members also tried their luck with fishing at the venue. The sporting events were followed by a ganamela in which all our members under the leadership of Sri. Rajeev Cherukad participated actively.

General Body and subject committee was held on the next day (25.5.14) at 11.00 hours. Inspite of some inconveniences like disruption of rail traffic in the morning, nearly 80 members participated in this mega event. Our Circle President Sri. T.M.Krishnaswamy presided over the subject committee and led the members in the detailed deliberations. Our Circle Secretary, Sri. Ajith Kurian enlightened the members on the various issues listed in the agenda. As many as four resolutions were drafted by the Committee of Resolutions under the Chairmanship of Sri. P.K.Sivadasan and unanimously passed by the House. All other items were discussed threadbare and decisions taken on all the issues. Election of the new office bearers was conducted in a cordial atmosphere. Accepting the proposal mooted by our CS Sri. Ajith Kurian, the House agreed to usher in a new team of office bearers to lead the Association for the next two years. The following members were unanimously elected as office bearers for the term 2014-2016:

The Subject Committee was followed by the Open Session in which Sri. S.Ramamurthy, DPS(CR) was the Chief Guest. Other invitees included Sri. N.R.Giri, SSP, Aluva representing the Kerala Officers Association,Sri. Narasimha Naicken, SP Lakshwadeep and Sri. P.A.Mathew, former President of the Association. Our Chief Guest Sri. Ramamurthy captivated and inspired the audience by his key note address wherein he took the members through the various phases of his career right from his entry into the Department as PA and till the present post of DPS. The Open Session was followed by a Tug of War contest between Southern Region and Central Region in which the Southern Region emerged winners.

Association conveys its gratitude to Sri. Ramamurthy and his wife and also to all other special invitees for having accepted our invitation and becoming a part of this mega event. Special thanks also goes out to all our dear members for having participated actively in the two day conference and for having made this event a grand success.Special thanks goes out to Sri. Anto.G.Manalil, and Sri. B.Padmakumar for identifying this unique venue and making all arrangements for making our Conference an event to cherish.
By IP/ASP Kerala Association - May 26, 2014 2 comments:

As all members are aware, preparations are in full swing for holding the 42nd Biennial Circle Conference of our Association on 24th and 25th May, 2014 at Kannamali, Kochi. Both Directors of the Circle, Sri. Thomas Lourduraj (DPS(HQ) and Sri. S.Ramamurthy (DPS(CR) have graciously accepted our invitation for participating in the Open Session of our GB and have consented to grace the occasion by their presence. Our General Secretary Sri. Vilas Ingale and All India Treasurer Sri. G.Yadagiri will also be participating in our two day conference. Representatives of the Kerala Officers Association are also expected to be a part of our programme. A tentative programme schedule of the open session is furnished below for the information of all the members.

Copy of the letter issued by CO is furnished below for the information of all members: 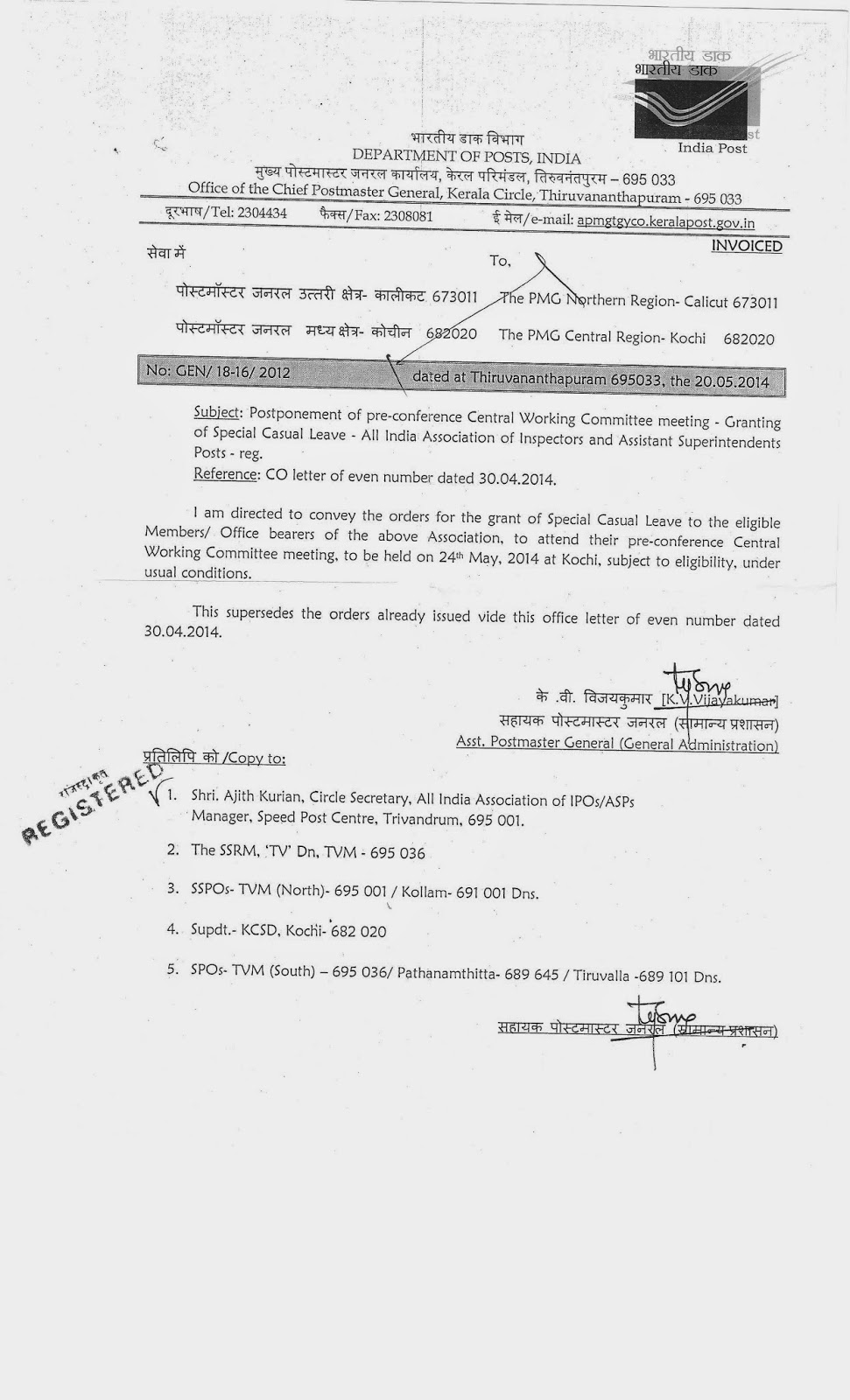 Chief PMG, Kerala, Smt. Shanthi.S.Nair, in response to the invitation offered by the Association for attending the Open Session of the 42nd Biennial Circle Conference on 24th & 25th May, has intimated her inconvenience to attend the conference due to some other engagements. She has wished the deliberations and conference all success. Copy of the letter given by Chief PMG to Circle Secretary is furnished below for the information of all members: 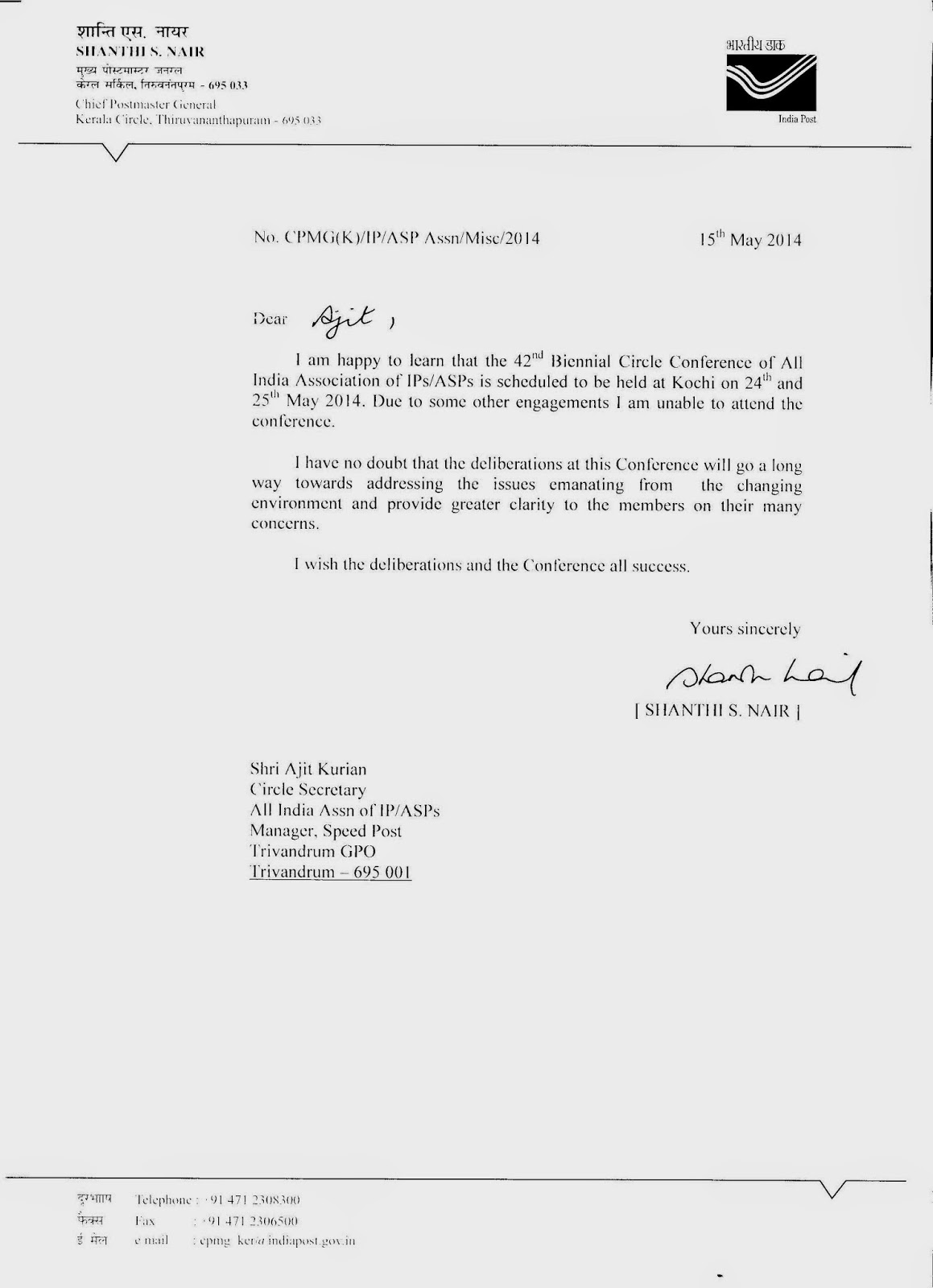 Under the provisions of Article 25 of the Constitution of All India Association of Inspectors and Assistant Superintendents Posts, it is hereby notified that the 42nd  Biennial Circle Conference of the Association will be held at Kannamaly, Kochi on the 24th and 25th May, 2014.

Links to other blogs / sites